Many people consider magic tricks as frivolous; unworthy of serious consideration. For the most jaded of audiences there are only so many doves to be miraculously produced from an oversized sleeve or rabbits that can be pulled from a top hat before interest falters and your audience has either left the theatre or reached for the remote control.

There are, however, a number of circumstances where the performance of magic has helped individuals survive in a hostile environment or greatly enhanced quality of life. In these circumstances magic is far from frivolous – it is deadly serious.

Take the case of Fergus Anckorn, a 96 year old man who was a Japanese prisoner of war for four years. Fergus was incarcerated in a camp in Singapore along with 10,000 fellow combatants. Fergus performed magic tricks for camp guards who rewarded him with food. The phrase ‘death defying’ is not unheard of in many magicians performances but for Fergus his magic could have made the difference between living and dying since prisoners were dreadfully undernourished and many didn’t survive.

Magic can be used to great life enhancing effect in other ways too. The Guardian ran an online article in 2014, describing the use of magic tricks to help hemiplegic children. Hemiplegia is a common form of cerebral palsy. Sufferers have weakened motor ability down one side of their body. Some walk with a limp or wear callipers. Almost all have one hand locked permanently in one position.

Led by a former magician turned QC, an organisation called Breathe Arts was formed at Guy’s Hospital. Here, hemiplegic children received 60 hours of intense training over 10 days, in the execution of magic tricks. The beauty of this highly effective technique is that in order to master these tricks the children have to work hard to get their ‘sleeper’ hands to move. Once they learn how to do the tricks this gives them a sense of achievement and an extended period of therapeutic exercise which might otherwise have been repetitive and boring.

Though the programme certainly results in children being able to perform a series of magic tricks – valuable in itself for social reasons – higher value lies in the increased use of parts of the body which might otherwise remain inactive.

As those who run the program say, ‘the magic is in using the extraordinary to achieve the ordinary.’

Mutus Nomen Dedit Cocis is a classic card plot in card magic based on a mnemonic that works with a 20-card mathematical cross-reference principle trick known as the Pairs Repaired. To start with you dish out twenty cards randomly in pairs face down, and ask ten people to take a pair each, and remember them.

Pick up the pairs in their order, and lay them face up on the table according to the Mutus Nomen Dedit Cocis memorisation method shown below.

Visualising these words in your mind on the table you can take the first card of the first pair and place it on the ‘M’ of Mutus and the second in the pair on the ‘M’ in Nomen. The next pair goes in the two ‘U’s of Mutus. The cards of the third pair would go on the ‘T’ in Mutus and Dedit; and so on until all the cards are laid in their places.

The whole table consists of ten letters, each repeated so you can point out a persons cards to them just by knowing what rows they are in; if the person says their cards are in the first and last rows you can point them out in the positions of the letters ‘S’. The video below shows the trick in action (same trick different words).

It’s kind of a mathmatical trick. Maths and magic often feature together. The Pentagram is quite famous as a magical symbol (amongst other things), has a pentagon inside and also a special number hidden called the Golden ratio which is approximately 1.618 and according to the voice over guy in Disney’s Donald Duck in Mathmagic land it was ‘our old friend Pythagorous who discovered that the pentagram was full of mathamagic’

From the Boston Public Library :

The Spirit of Old Santa Claus
Communicates with me :
From spirit debunking task I pause
To heed his worthy plea.

I stir myself to print these thoughts –
A poor but sincere way,
To let You know I’m thinking lots
Of You this Christmas Day. 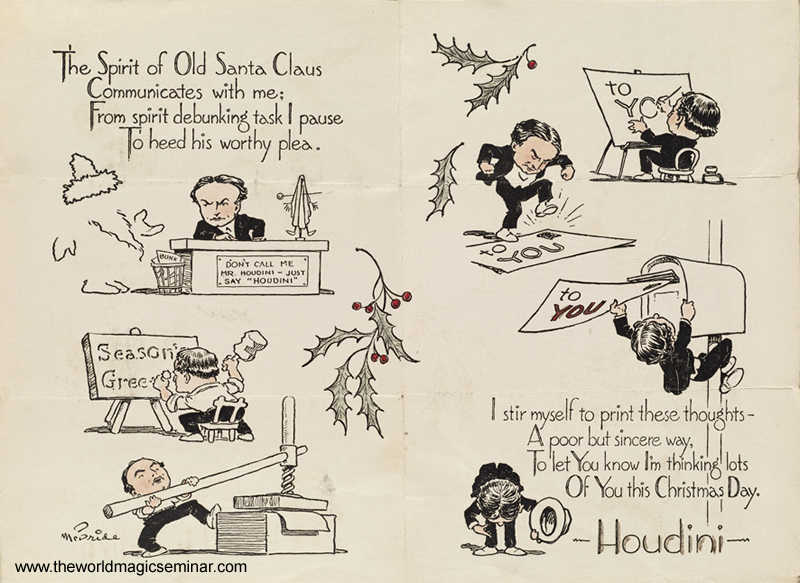